Post-Stonewall gay liberation was an exciting time. The activists who made it happen were unique visionaries, some would call them illusionists, as it was an outrageous idea that they could change long-held status quos for gays and lesbians. It required many strong egos, eccentrics and hard-working activists, to shift the equilibrium of civil liberties for homosexuals. This biography is not been written to glorify Morris Kight, and yet at times it might simply because the facts speak for themselves. Whatever the disputes, and there are many, despite how many people his out-of-control self-importance alienated Morris Kight was definitely in the delivery room, if not on the table, for the birth of gay liberation. In this telling of this important history, Kight is central.
This particular slice of the Kight and early gay liberation story is from 1973, a pivotal year in the endurance and indelibility of the annual gay pride celebration. The first Gay Pride Parade in 1970, Christopher Street West, was able to happen after a belabored battle between LAPD and gay leaders. An eleventh hour California Supreme Court decision ordered the police commissioner to issue a parade permit citing the “constitutional guarantee of freedom of expression.” The victory was sweet and yet it wasn't the only threat to a gay parade. From the beginning, parade organizers and participants knew there were risks of violence. Kight received death threats right up to the morning of the parade. Unlike what we see today, the first gay parade was very quiet. The marchers convened on McCadden Place in Hollywood, marched north and turned east onto Hollywood Boulevard. As they turned the corner, they had no idea what was waiting for them. Spectators lined both sides of the boulevard and everyone who was there had a very different reason for being there. LAPD was prepared for a riot with overhead helicopters.
Instead, the parade helped to kick open the proverbial closet doors on America and out sprung a new force to be recognized. Two parades later, the cohesive quiet of the first parade had turned into a cacophony of different values and perspectives—within the nascent gay community.

Excerpt from:
The Kight Affect
The Authorized Biography of a Gay Liberationist
© All rights reserved, not for reprinting without permission

-Mary Ann Cherry
© All rights reserved, not for reprinting without permission

Posted by Mary Ann Cherry at 12:31 AM No comments:

Who was Morris Kight


Morris Kight was born into a world of Jim Crow, KKK, and prohibition.  He witnessed women march to demand their right to vote and survived a time when there was no such thing as “gay” much less Gay Rights.  People like Kight, homosexuals, were commonly referred to as deviants, perverts, misfits and much worse.  He left the harsh world of east Texas and succeeded in a time and place where the nicest thing that could be said about a homosexual was absolutely nothing.
In 1957, Kight threw away the conventional life, moved to Los Angeles and became a full-time activist.  During the anti-Vietnam War movement, Kight was prominent in the creation and effectiveness of the Dow Action Committee which forced the Dow Chemical Company to stop producing napalm and was the first successful corporate boycott.  During this time, Kight formulated underground social services for gay men in crisis and by 1963 his Bunker Hill bungalow became known as the “clap shack.”  These services were the earliest seeds for what later became the Gay Community Services Center (now fondly known as the LA Gay and Lesbian Center).
I have done my due-diligence in researching Morris Kight and it has been a wonderful journey.  In addition to the research, I have done close to 100 interviews.  Some people I spoke with needed to vent, others gushed.  A few people refused to speak to me at all.  The grand panjandrum of gay liberation is a complicated character.
He deserved a good reputation for his steadfast commitment to non-violent social change which he tarnished with endless self-promotion.  Because of his flawed character his contributions could easily have been marginalized from the bigger gay history, which continues to be at risk for its own marginalization.  Kight’s legacy was the most important thing to him.  In my opinion, the legacy holds up without his constant buoying it up.  Despite the fall-out from his out-of-control ego, his accomplishments are solid.  In the end, Kight’s biggest ruse may be that his story really is as interesting as he was trying to tell us.
I am offering up few slices of the Kight story prior to publication, just a taste.  Kight did not please all the people, ever.  This book will not please all the people either.
For me, the Gay Liberation Front (1969-1971) is a crucial time for gay liberation.  The demonstrations, ‘zaps’ as they were called, were inventive, dangerous, and effective.  The GLF collided, and not always in harmony, with every other radical movement of the day (the Black Panthers, the women’s movement, anti-war, farm worker’s labor movement, and the nascent ecology movement) as well as every law enforcement agency from the FBI to the local Sheriffs.  It is an unprecedented and pivotal time in history when the GLF in Los Angeles and the Gay Activists Alliance in New York introduced mainstream America to openly homosexuals.
Posted by Mary Ann Cherry at 11:59 PM No comments:

Some Friends of Morris Kight 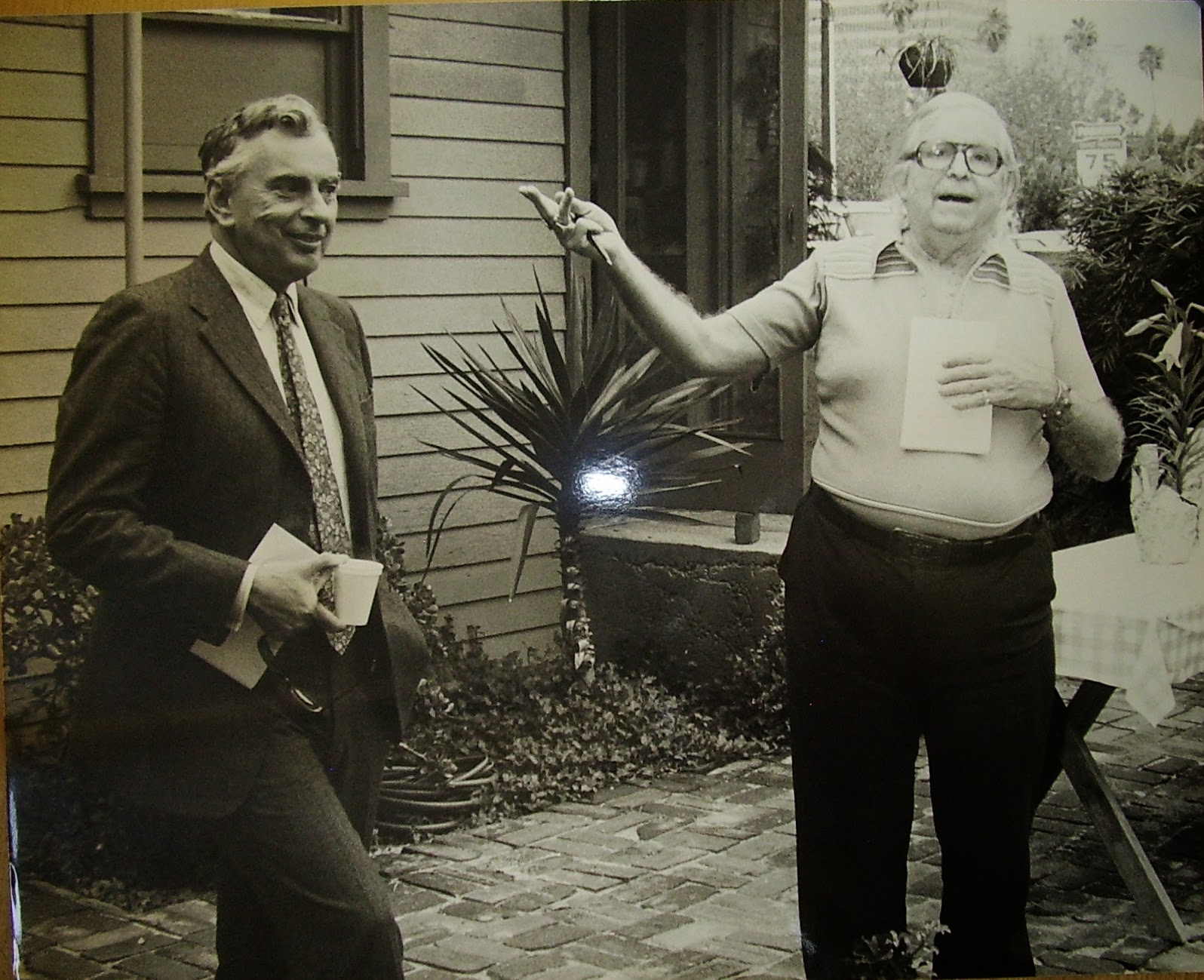 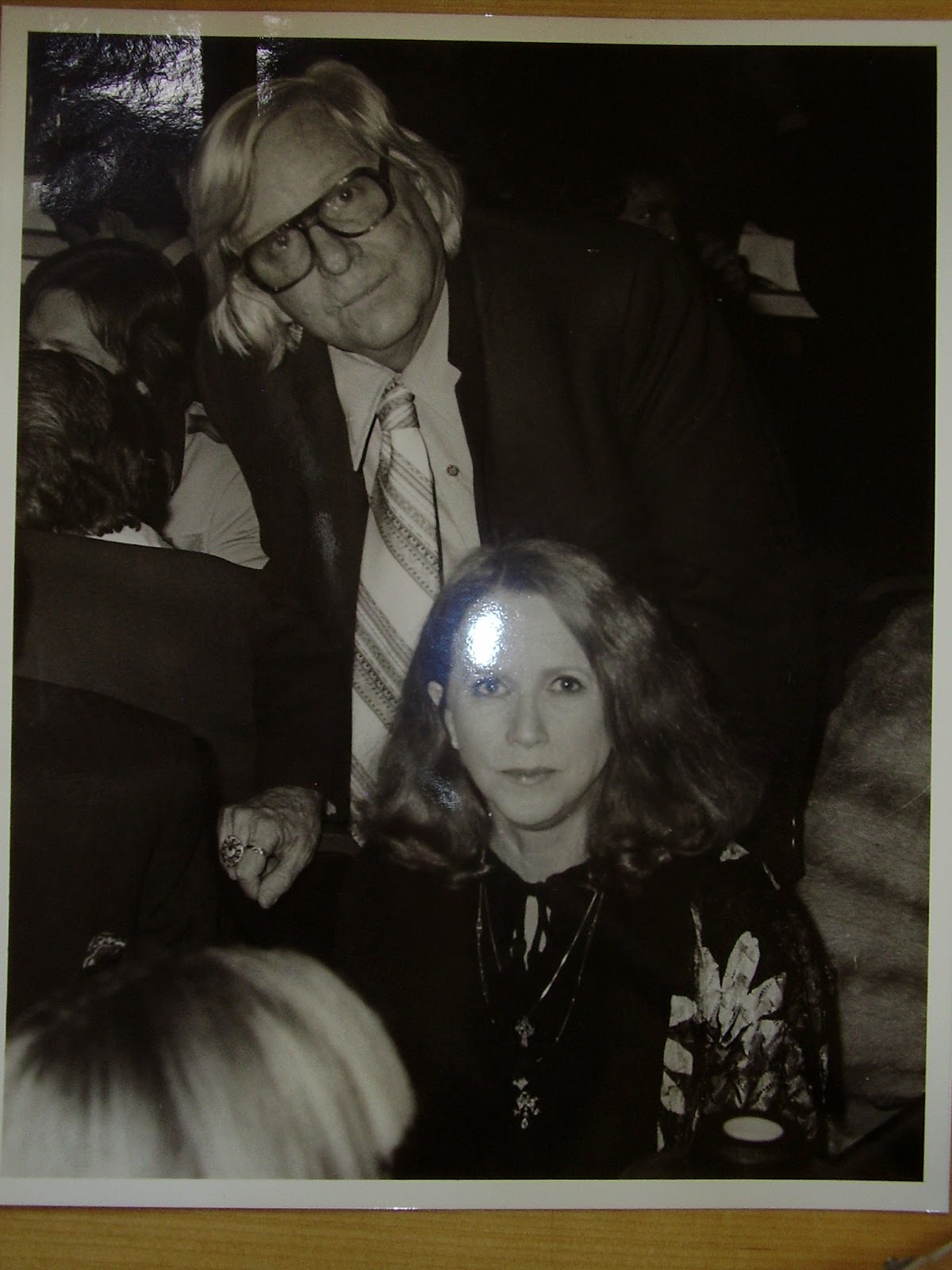 Morris with Julie Harris, circa 1985