The Maker of this Page

The maker of this page is busy writing the complete Morris Kight biography. Publishers are being sought as well as interest from ancillary markets. It has become an important work, historical in its context and personal in the revealing of Morris Kight. That's the point of a good biography. It's informative and entertaining. Anyone who knew Morris will tell you that he was entertaining.  Looking forward and seeking support, please direct all interest to Mary Ann Cherry at mcherry@pacbell.net. Just put "Morris Kight" in the subject header and I'll read it promptly. 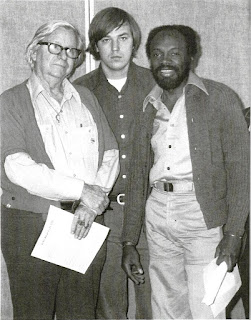 
Posted by Mary Ann Cherry at 9:32 PM No comments:

This is a rather long video, over an hour, and well-worth the effort for those who are interested. Morris vehemently opposed the Coors Brewing Co and took great umbrage with the Coors family support of anti-gay and lesbian legislation and causes.

Morris was almost 80 years old when this video was shot. He never lacked for enthusiasm in his opposition to Coors, That is obvious in this video. But the underlying story, what was really happening here (and it dramatically heightens at around 01:07:03 through 01:10:00) was the 'new guard,' the 'new leadership' of the gay community standing ground against the old, the founders, the shoulders on which they once stood. It was a new generation with different values.

For a feisty old man, privately Morris was a bit crushed by this.

Here's the link again, in case you missed it.

This week we say goodbye to a number of Kight friends and colleagues. Al Martinez, of the Los Angeles Times, wrote about Morris many times over the years. He once described Morris as a "an odd little man with a pear shaped body," which was as accurate a description as one can get. But Mr. Martinez always got better.

With due respect and pending permission from the LA Times, I reprint Al Martinez's final words about Morris. Rest in peace, good man. You will be remembered fondly.


No Sad Songs for Him
By: Al Martinez
Morris Kight is dead, but you won't find me crying into my martini. Here was a man, to paraphrase Zola, who lived out loud, filling much of his 83 years with commitment, a fighter and teacher who led every parade he organized and was at the forefront of every battle he fought. Not a bad legacy to leave behind.
Kight was the quintessential gay activist going back to a time when that wasn't a terrific thing to be. He stood in the open like a soldier under fire, calling for the troops to follow, leading the way. I don't have a lot of heroes, but Kight, a funny little man with an affected manner of speech, was one of them.
His life was a monument to high conscience.
I remember him best bustling about and commanding attention, a guy in control of his commitment to elevate and celebrate gays and lesbians everywhere. But I also remember talking to him in the hospital two weeks before he died when his fire was damped to a whisper, thinking the man still had authority in his voice.
Kight had all kinds of firsts to his credit, but you can boil them all down to a belief in human rights and a willingness to stand up for them. He marched for peace and disarmament too, because he knew they were right, but his main cause was to free gay people from the chains of hatred.
He was co-founder of what is now the Gay & Lesbian Center and an organizer in 1970 of the West Coast's first gay parade, which became a declaration of pride and freedom for L.A.'s gay population. It's a model for the nation, if not the entire world.
I met Kight years ago when he put me up for a humanities award given by the L.A. County Human Relations Commission. He'd been a member of the commission then for 20 years and retired just last year. I remember thinking how theatrical he seemed, how his simplest comment was accompanied by a grand flourish, as though he were performing before a crowd.
He telephoned many times after our first meeting, mostly to talk about what was going on in his life, and I began to get the uneasy feeling that he was trying to use me as an instrument to publicize his grandeur. I was right and I was wrong.
Looking back, I think Kight could have been sensing that the end was near and wanted to be certain that he would be remembered not just for his own personal glory but also as a way of perpetuating what he had begun. And I began to understand how theatrics are an element of leadership, the ability to call attention to one's self as a focus of the message that must be heard.
Oddly, Kight seemed uneasy with the praise offered on the day he left the Human Relations Commission, at one point almost cutting off Supervisor Zev Yaroslovsky, his most ardent supporter. He fidgeted and wanted to move on, to use what energy he had left for something better than the ritualization of the work he'd done in that one area of his life. He was thinking ahead.
What I recall most from the last commission meeting Kight attended was a comment by Yaroslovsky that Kight had emerged from an era when it was dangerous to be openly gay but was willing to risk his life for the benefit of a people who had been too long in the shadows. "When the history of civil liberties is written," Yaroslovsky said, "he'll be there."
Kight knew almost from the beginning what it was like to be the victim of hatred. While his father was understanding of his "gayness," his mother remained hostile toward him until she died. After her death, Kight told me in a voice strangely muted, he found notes she had written that burned with hatred toward homosexuals. "She'd have been happier," he said softly, "if she had loved me."
Many will attempt to define Morris Kight as the months and years pass. It won't be easy. Humans are complicated creatures and leaders even more complicated. He was, as we all are, a series of contradictions that eventually merged into a single life's goal. That goal was to galvanize a generation into believing in itself and, in effect, gathering the courage to believe in himself.
Great leaders do what they do partly, I think, to fill an emptiness in their own souls, and we all benefit from that effort.
You'll hear a lot of that at Kight's memorial next month. But what will remain as the years pass is the simple reality that he was a guy who stood in the face of fire, a portly figure in a wide-brimmed hat and with a funny way of speaking, who lived out loud and who died in peace. That legacy is safe. Play taps.

Permission pending from LA Times (reprinted from Jan 24, 2003, Calendar Section) at latimes.com/archives.
Posted by Mary Ann Cherry at 9:47 AM No comments: