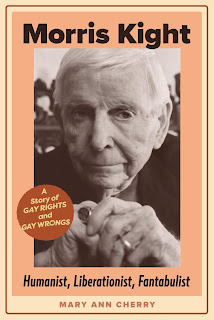 May 26, 2020 from Process Media.
Check back for details on how to obtain your inscribed copy.

Michael Kearns is a great interviewer. He brings his personal relationship with and his love

for Morris to his job. He does important and fascinating work with QueerWise (an LA

collective of LGBTQ writers 50+). Under the tutelage of

performances. Michael has many other interesting projects, follow him on social media or

on his website.  Here is Michael interviewing me regarding the upcoming Morris Kight

Interview with the Author


Posted by Mary Ann Cherry at 9:15 PM No comments:

COMING SOON TO A BOOKSTORE NEAR YOU (and online orders too):
From Process Media (an imprint of Feral House), April 2020.

The full story, from the beginning (1919) through Kight's college years in Fort Worth (1930s/40s), the Career Services Training in Albuquerque and his military years in San Diego (1940s). The book goes into his married life in Albuquerque in the 1950s and the painful separation that led to him to Los Angeles in the late 1950s. This biography includes his early involvement with the anti-war movement in the early 1960s and his full-on commitment to the end the war in Vietnam in the mid-1960s. Meanwhile, Kight was extending his underground bail fund and backroom treatment for STDs to gay men (some heteros found his help with STDs). Back in those hard days, doctors were required to notify the Board of Health of any such diagnosis which would then lead to a newspaper announcement, notification to employer and spouse, and most certainly led to ruined lives. The book details his post-Stonewall full commitment to gay rights and his co-founding of the Gay Liberation Front in 1969.

The early 1970s was about GLF, co-founding the first 'legal' gay pride parade which marched down Hollywood Boulevard marking the official 'coming out' of the entire gay revolution. Next was the co-founding and opening the doors of the Gay Community Services Center (as an extension of Kight's underground services and the Gay Survival Committee operating out of the GLF). Kight founded the Stonewall Democratic Club which has facilitated changes in legislation and supported gay-friendly candidates.


The later 1970s were unprecedented with multiple unpredictable advancements in the groundwork for gay rights. It was also a time that awakened new, 'devout' opponents to gay rights. Bryant, Briggs, and LaRouche all threatened the very livelihoods and existence of gay people simply because of who they loved. They needed to be defeated and they were.

Kight began his two decade career, with successive appointments, as a Commissioner on the Los Angeles County Human Relations Commission in 1979. That opportunity literally gave homosexuals a seat at the table of social reform.


The early 80s brought the most horrifying threat to the existence of gay men. A critical virus that became known as AIDS changed the world, it changed individual lives, and it changed the gay movement. The best response that Kight had was to organize. The organizing muscle demonstrated by the global gay community was effective beyond imagination and shape shifting.

The gay community had grown up and Morris Kight was the elderly grandfather, godfather, mentor, statesman, friend, opponent, and sometimes pain-in-the-ass. He was consistent.

Kight gave his blessing for this biography soon before he died in January 2003.


Posted by Mary Ann Cherry at 9:11 PM No comments: